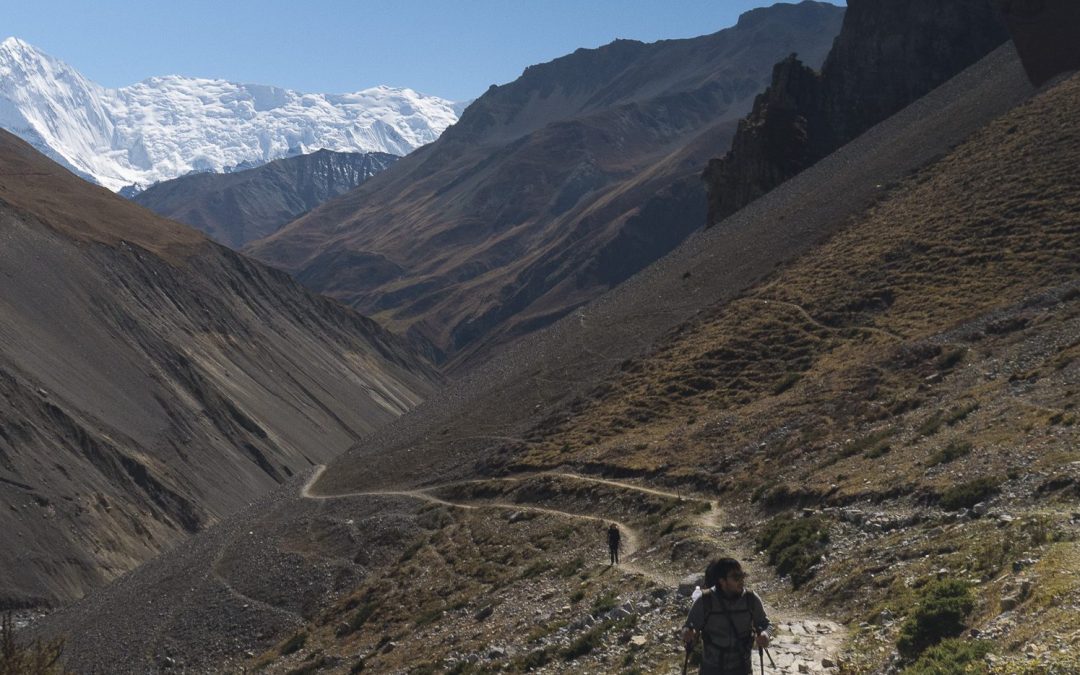 This post is all about my experiences hiking the Annapurna Circuit in 2016. Let’s dive in!

After a long and arduous journey from Tokyo, we arrived in Kathmandu, colourful, crazy, congested Kathmandu. After the clean streets and iced coffees of Tokyo, Kathmandu came as a shock. Our taxi ride from the airport to the tourist area of Thamel gave us a taste of what was to come. Crazy driving and traffic, crowds of people and a vibrancy and energy that’s hard not to like. We stayed in Kathmandu just long enough to pick up some last minute supplies. We also had to arrange our permits for hiking the Annapurna circuit. 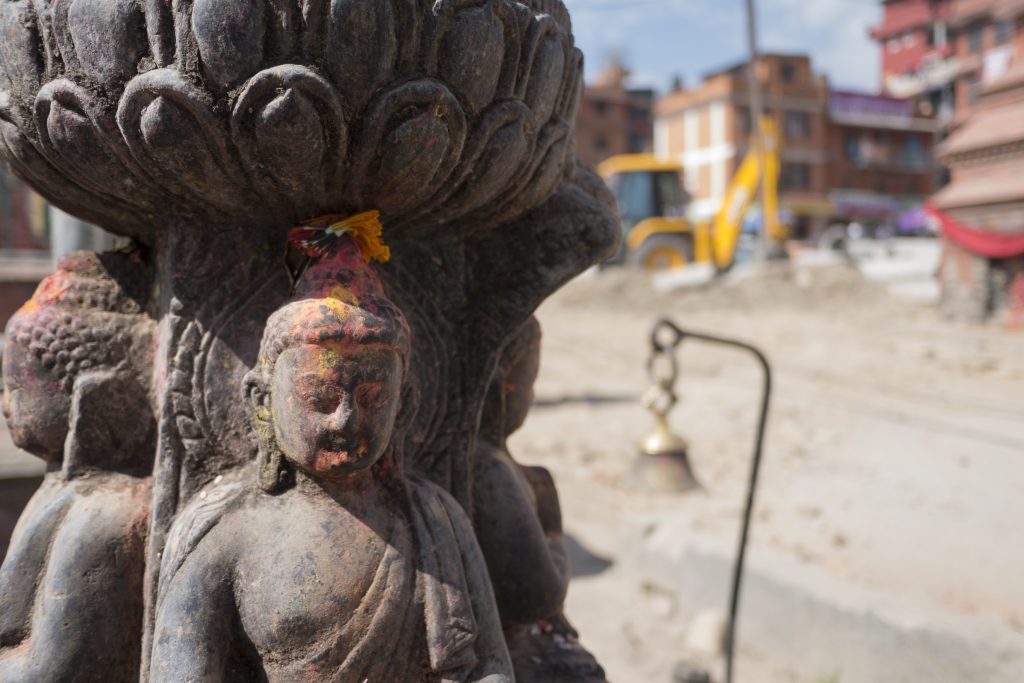 We decided to take a private car from Kathmandu to Besisahar rather than the local bus, as splitting the cost four ways and saving some time seemed to make sense. The journey was still six or seven hours over some pretty terrible roads but we arrived in one piece and checked into a $1 a night hotel. So yeah Nepal is cheap, probably the cheapest place I’ve ever been. Accommodation is cheap as is local food, beer is pretty comparable to what you’d pay in the US. Besisahar was much more relaxed than Kathmandu, the locals don’t get the same level of interaction with foreigners so they were intrigued by us. Little kids approaching us on the streets and staring at our beards, blue eyes and blonde hair. 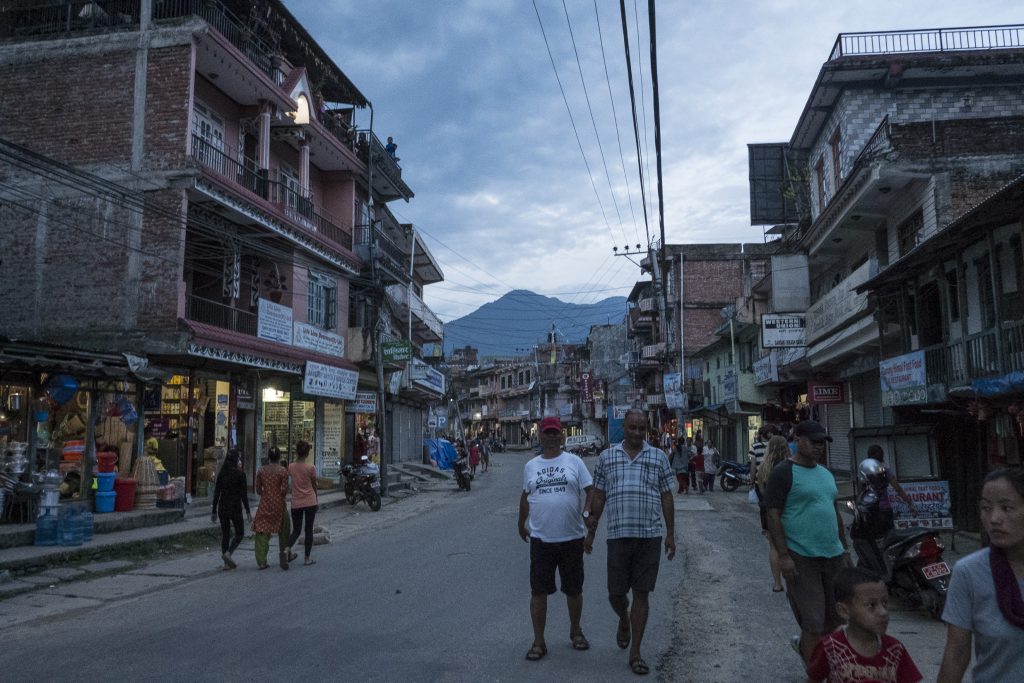 The next morning we would begin hiking the Annapurna Circuit so after some food we hit the hay. We took the local bus to Khudi and as soon as we left Besisahar the roads went from bad to terrible. The packed bus slowly made its way over rocks and river beds and teetered over long drops several times. This is real travel, none of this air con, wifi stuff.

Many people skip this section when hiking the Annapurna Circuit. It effectively skips the “jungle” section. We decided that seeing the trail transition from jungle to snowy passes would be worth the extra effort.

Hitting the Trail on the Annapurna Circuit

As we started hiking the heat and humidity immediately became evident, I haven’t sweated like that since the Appalachian Trail. The terrain wasn’t too tough at the start but didn’t take long before we were hitting the ups and downs. We had an easy first day stopping often to take photos of the local kids and the wonderful scenery. I’ve never seen so many waterfalls as I have on this trail. 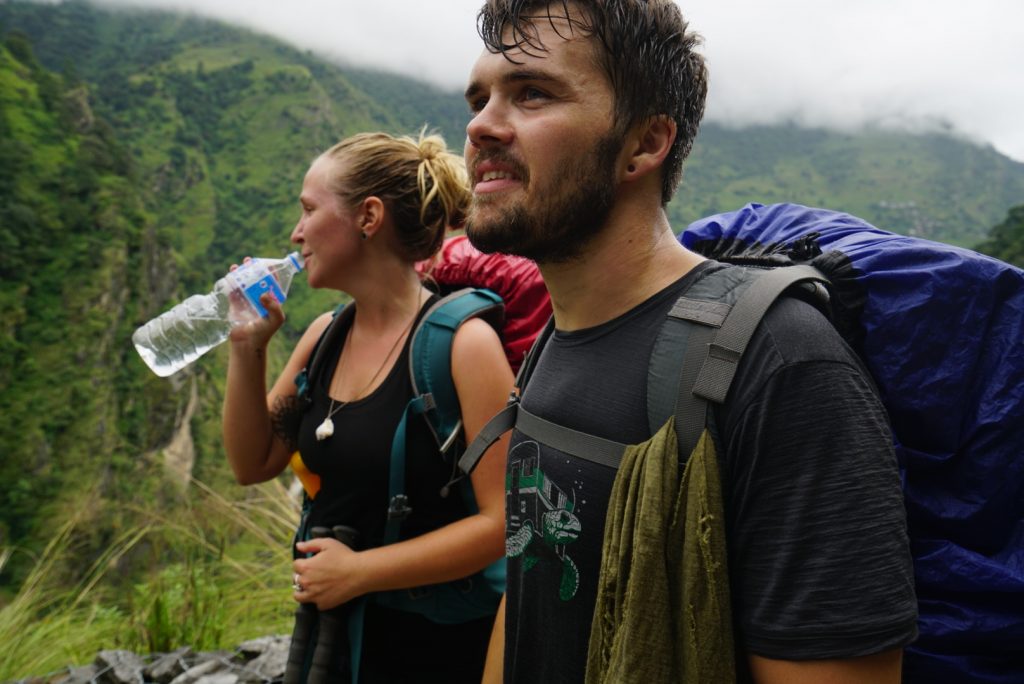 We followed the Marsyangdi river for the first few days and there were waterfalls every step of the way.

Not carrying much food and sleeping in Tea Houses is rather luxurious. However, I had a tough time the first couple of days. The humidity and not being fully adjusting to the Nepalese diet found me pretty pooped on the uphills and in the privy. Once I’d got my trail legs the hiking became easier even though the terrain got gradually tougher. 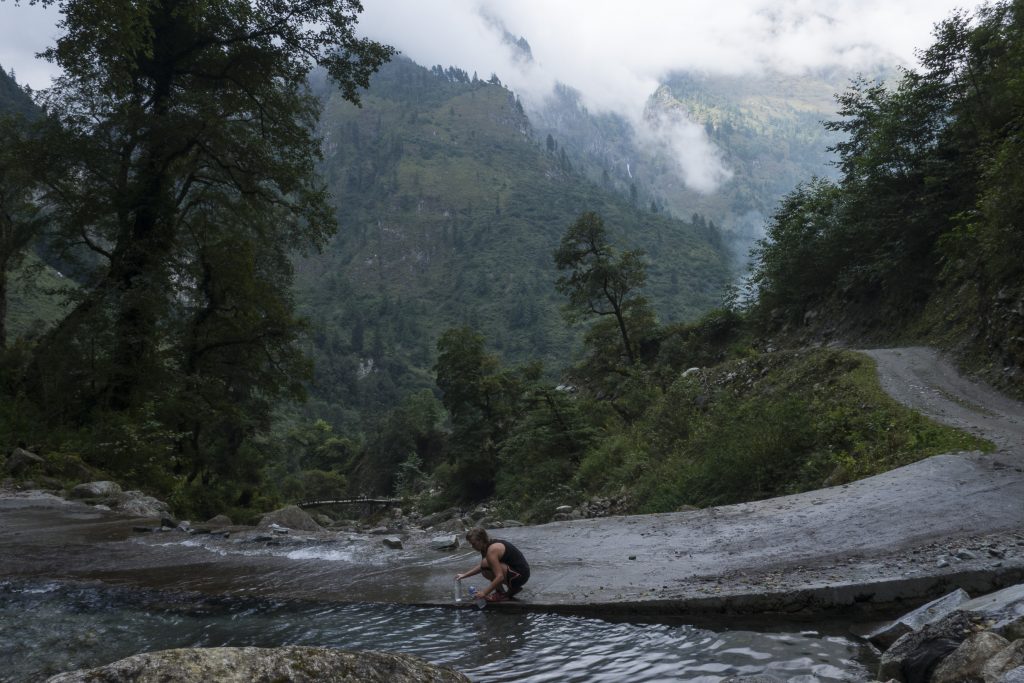 Getting Sick on The Annapurna Circuit

On the morning of the 7th of October I woke up in a pretty bad way. Over the past couple of months, I’ve been suffering from a niggling back injury from Jiu-Jitsu and I woke up in a lot of pain. Add to that an upset stomach and a cold and I wasn’t feeling too stellar. I dosed myself up with Ibuprofen, Imodium and a healthy dose of caffeine to get myself out on the trail. With the help of some loud metal, I managed to keep a decent pace for a few hours before I started to fade. By 1 pm I was feeling dizzy and weak and had to stop for the day. Luckily we were pretty close to the scenic town of Tal and managed to find a nice place to spend the rest of the day.

After a good night’s rest I awoke feeling better and ready to start hiking. I think this was a classic case of listening to your body and I’m so glad that I did. 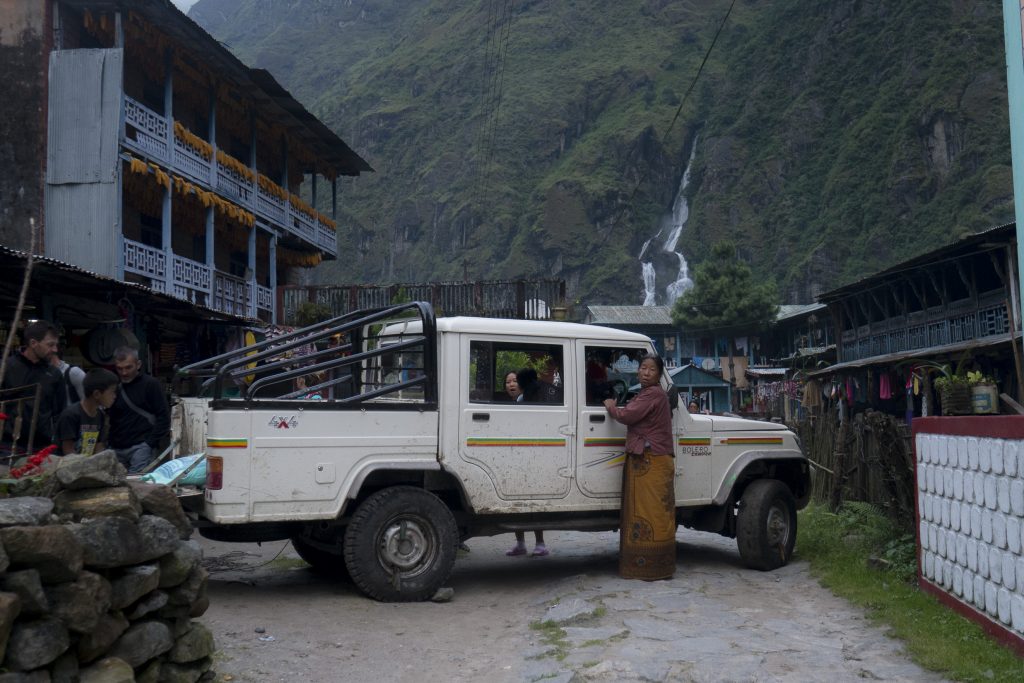 One of the things that surprised me about hiking the Annapurna Circuit is the number of animals we came across in a single day. Many of the locals are self-sufficient with their own goats, chickens and/or Ox but we’ve also seen Donkeys, ducks and plenty of dogs. We also saw monkeys a couple of times, albeit from a distance. 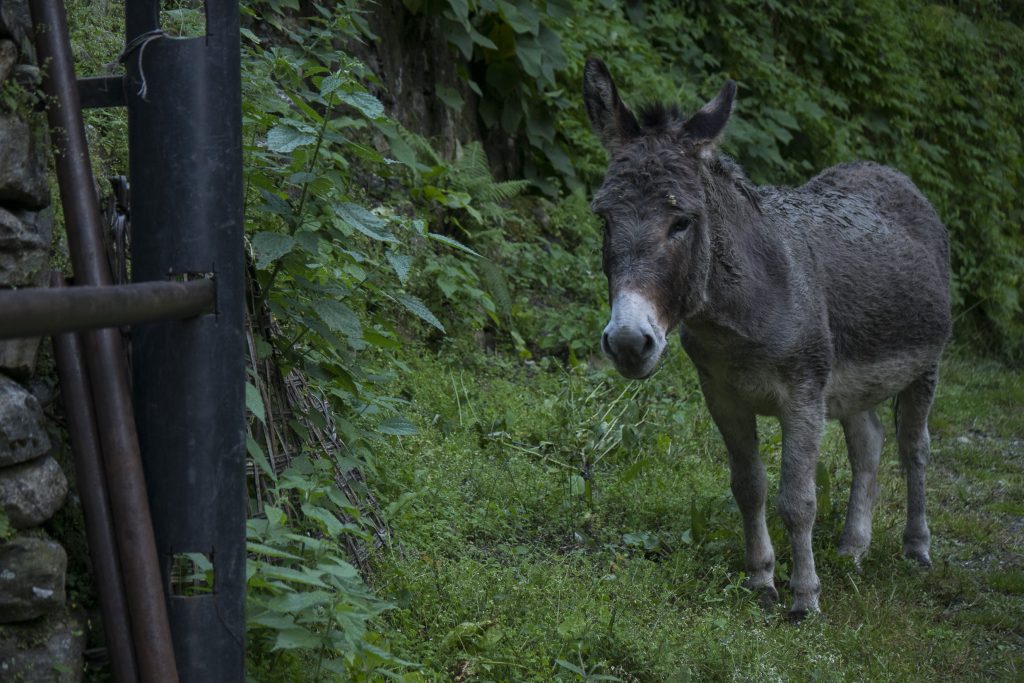 Hiking most days was comfortable in shorts and t-shirt but the gloves and rain jacket had to come out if the winds were blowing or the sun went behind the clouds. In the evenings though it got down to around 4 degrees celsius and even below freezing at one point, we were wearing almost every layer we had. Most of the teahouses had no heating aside from a wood stove in the common room. We huddled together there while we ate and then retreated to the puffy world of our down quilts. 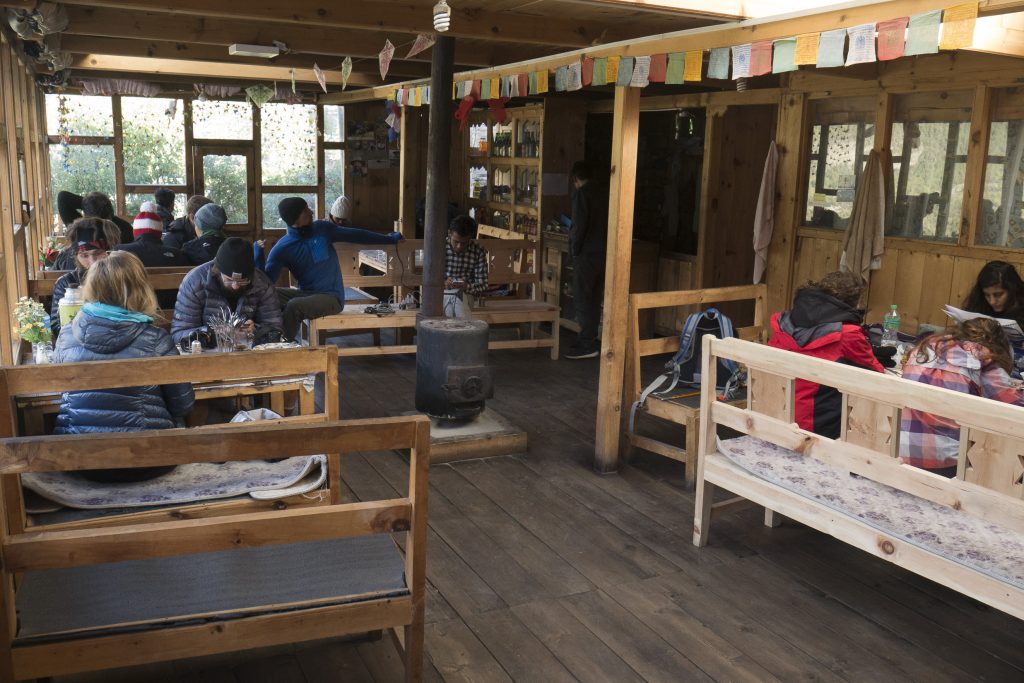 I’ll be honest I underestimated this hike, to be more accurate I failed to research properly. I knew basically what gear I needed so I was pretty set in that regard but I wasn’t prepared for the rugged terrain and the effects altitude would have on my body.

I’ve stayed in shape since the Appalachian Trail mainly from BJJ and general gym work, but hiking with a pack over rugged terrain is, of course, a different animal. Adding in the effects of elevation and I was left huffing and puffing and feeling weaker than I’d expected to be. This hike is not something to be taken lightly.

Our fifth day of hiking the Annapurna Circuit saw us arrive in upper Pisang. A more difficult route than the one to lower Pisang but very much worth it. Upper Pisang is perched on the side of the mountain and many of the buildings are constructed in a traditional way. Thin rocks piled painstakingly atop one another. The view from our teahouse was obscured when we arrived but the next morning brought us the view below. Our first up-close and personal view of Annapurna 2. 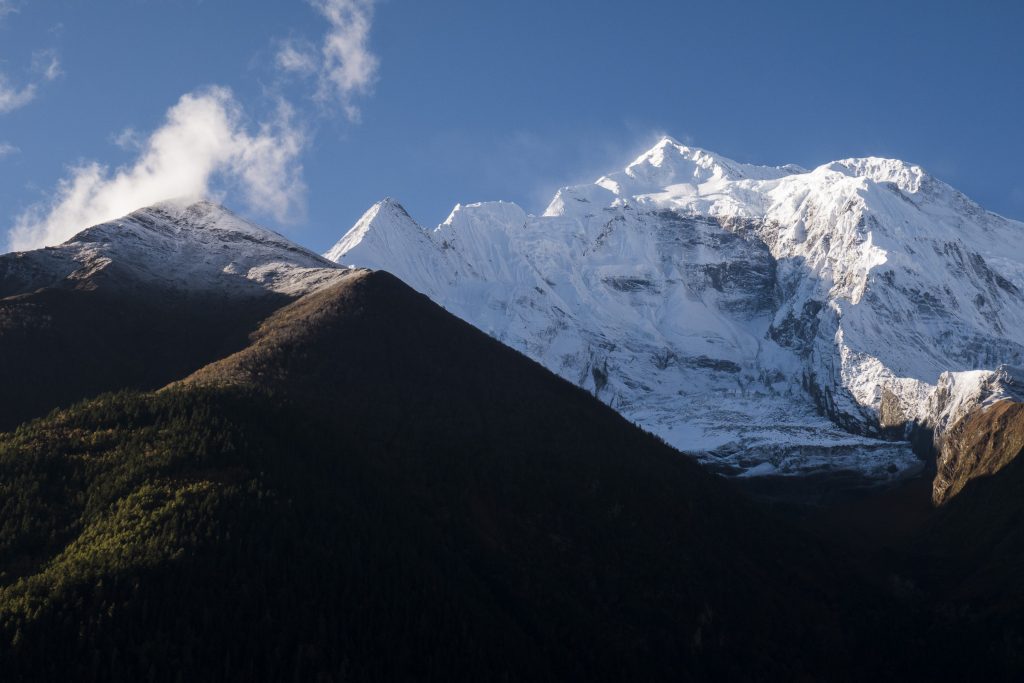 From Upper Pisang, we had a long day punctuated by a steep, long climb up to Ghyaru. The climb itself and the rapid ascent of over five hundred meters left us spaced out and winded but we managed to push onto Braka for the night. For a day’s rest and to help acclimatize we just hiked thirty minutes the following day to Manang. Manang is a busy town that has a lot of trekkers getting rest and final supplies before making the slow push towards Thorung La Pass. We “enjoyed” cold showers and got our supplies. We even managed to watch a movie in the cutest most ramshackle movie “theatre” I’ve ever seen. We watched Seven Years in Tibet, a great movie that seemed to fit the moment.

We’d been 100% veggie up to this point on the trip and it had been working out really well. However, me and Click decided to mix it up and try the Yak Fajitas. When in the Himalayas right? The next morning it didn’t prove to be such a good idea. The two of us were suffering from serious stomach pains. No hiking that day. Frustrating not to make some progress but important to listen to your body.

We had a pretty miserable day spent on the toilet and resting but with everyone feeling a bit better the next morning we finally managed to get on the trail. The guidebooks recommend doing small days from Manang to help adjust to the increased elevation so that’s exactly what we did. Manang to Yak Kharka 2 hours in one day and then Yak Kharka to Thorung Phedi around 3 hours the following day. From Manang we went steadily up, reaching 14,600 feet at Thorung Phedi. The going itself wasn’t too bad but the elevation means the lungs were burning and it was hard to catch your breath. 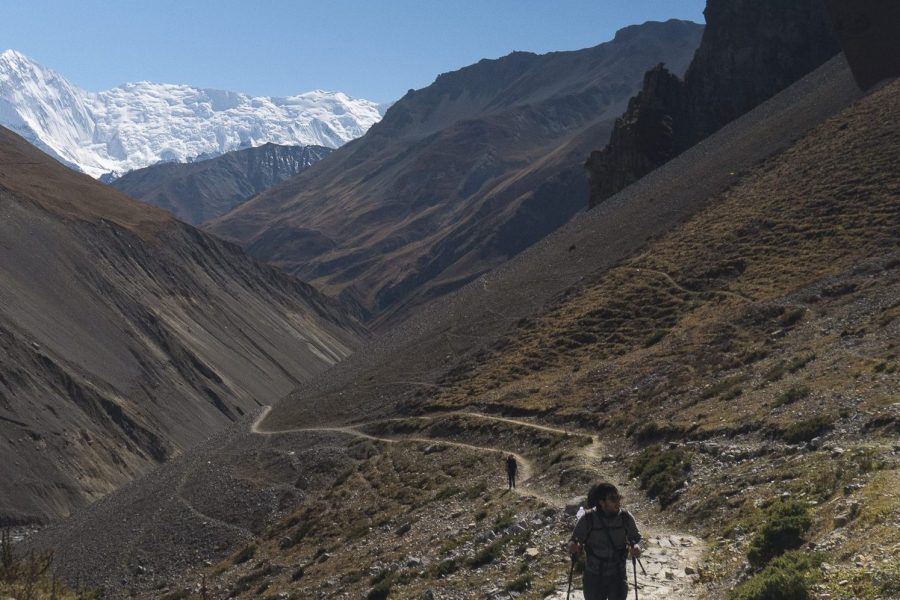 After some excited conversation and planning the next days climb to Thorung La Pass, we get some much needed sleep. An early start saw us immediately climbing. We had almost 3000 feet to climb in around four hours so the going was steep and seemingly never ending.
117,769 ft/ 5400 metres is by far the highest I’ve ever been. The previous highest being Mount Tajumulco in Guatemala (4222m).

We reached the pass after five hours of climbing. I felt motivated and energised which helped group moral as not everyone felt so good. Cheesebeard got hit hard with the early morning Delhi Belly. Stomach pains and the need to stop for emergency toilet breaks on the side of the trail made his experience less than ideal. All credit due though he powered through and stayed positive. 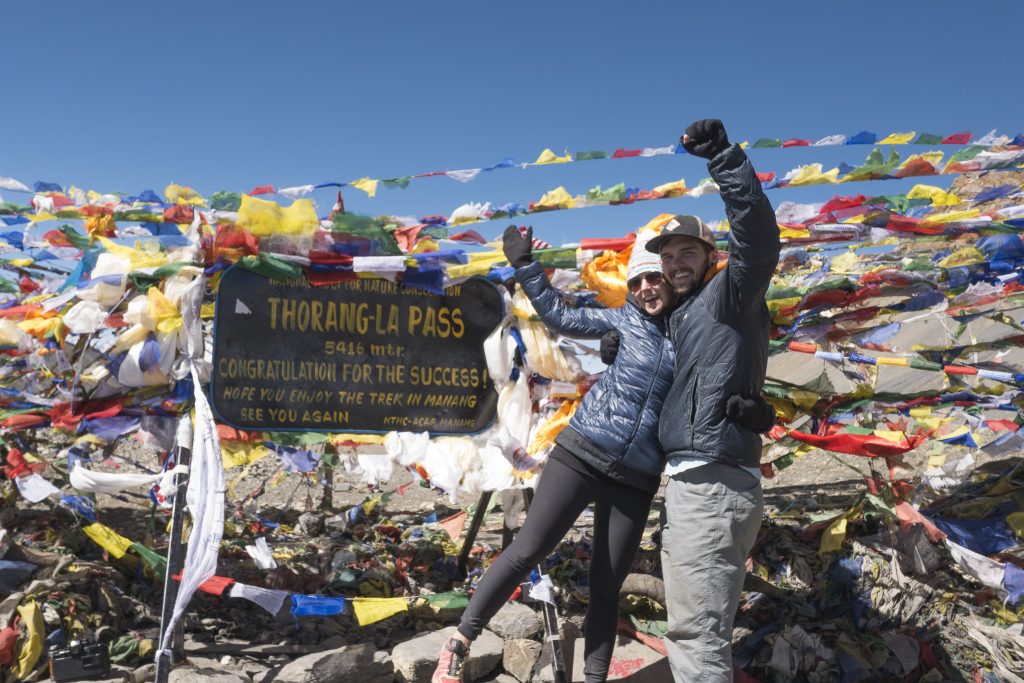 The pass itself is pretty much what I expected, windy, cold and covered with prayer flags. We layered up and took the obligatory photos before making the long journey down the other side.

Down we did indeed go. We lost elevation rapidly and It became easier to breather with each couple of hundred meters. The final section was extremely steep and rocky and we had to keep our wits about us to not tumble the rest of the way. With the steepest section behind us, we pushed onto Muktinath, which would be our end point of the trek. With such an early start in the morning and a grueling day behind us it was a relief to get a hot shower. We ended the day with a celebratory beer with other people that had been hiking the Annapurna Circuit.

Our decision to end the hike in Muktinath came after some deliberation. After twelve days of hiking, we were all ready to finish up. Especially since the boys were a bit “hiked out” from their PCT. From Muktinath, the trail and the road leads to Jomsom. It was dusty and the relentless sun made us grateful for riding the bus rather than continuing to hike.
After a couple of days of riding sketchy local buses we arrived in Pokhara, Nepal’s second-largest city. It was quite surreal to be in such a developed tourist area after hiking for nearly two weeks hiking. We managed to find an amazing tandoori chicken restaurant. Then the white Russian’s served at the “Movie Garden” was just what the doctor ordered. 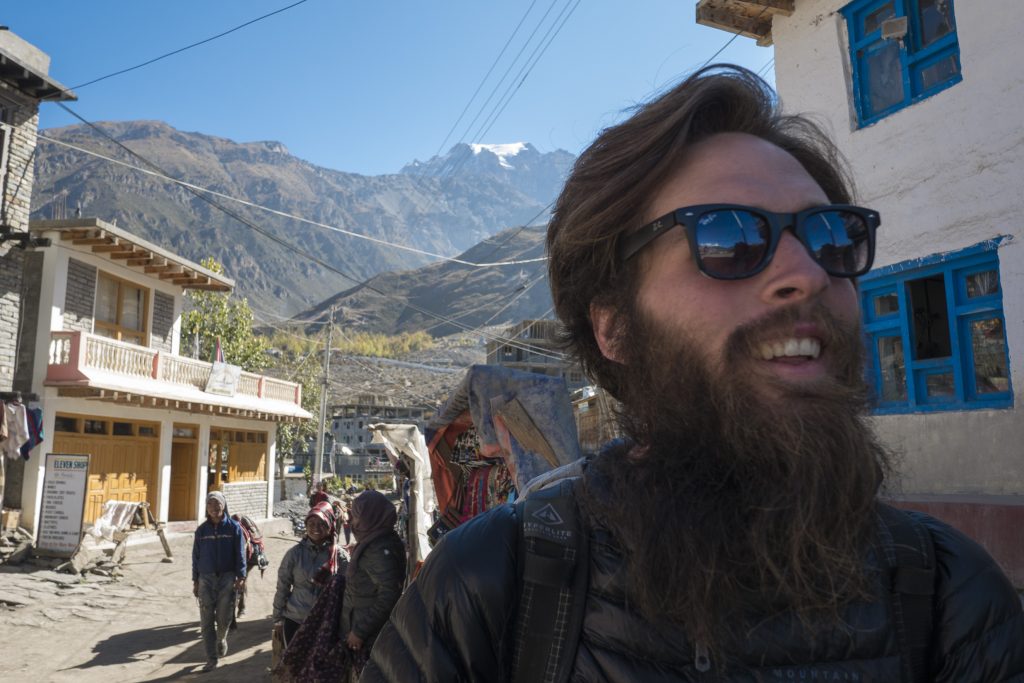 There’s something special about Hiking the Annapurna Circuit, one day I will return.

Check out the gear I used on the trip here